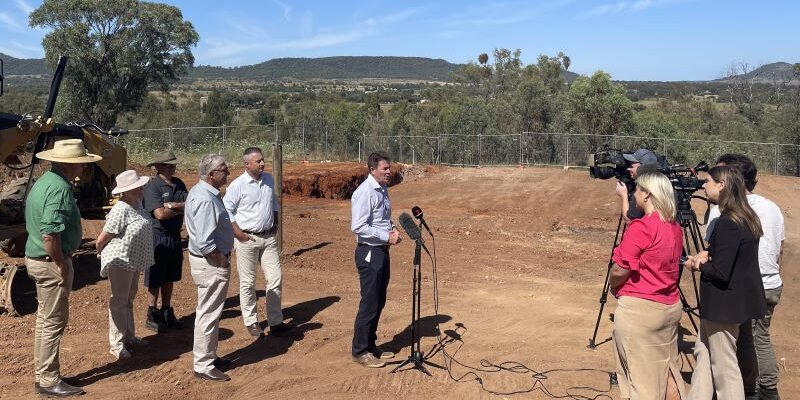 Visitors from far and wide are set to flock to Gunnedah in 2024 thanks to $8 million in funding from the NSW Nationals in the state government’s Regional Tourism Activation Fund to accelerate the delivery of stage three of Gunnedah’s Koala Sanctuary.

Nationals Member for Tamworth Kevin Anderson said this new funding is in addition to $5.624 million from the Resources for Regions Round 9 fund and $6.48 million from the Regional Communities Fund for stage two of the project, bringing the total NSW Government investment in the koala sanctuary to $20.1 million.

“The Gunnedah Koala Sanctuary is a significant development for the future of the Gunnedah Shire, both for the preservation of our most famous native species, and for the significant boost it will provide the visitor economy,” Mr Anderson said.

“Gunnedah Shire Council have been working hard behind the scenes on this project, and now dirt has been broken, we will soon begin to see why this sanctuary is so important for the future of the Gunnedah Shire.

“It’s great to be able to announce additional funding from the Regional Tourism Activation Fund which delivers the funding needed to complete stage 3 of the project, including developing safari tents for overnight stays, powered caravan sites, buildings, pathways viewing areas, a petting zoo and more.”

Mr Anderson said the sanctuary will solidify Gunnedah’s reputation as the Koala Capital of the World and preparations can now be made for a grand opening in late 2023.

“Once open, I know tourists from across our state will be booking their tickets to Gunnedah and local businesses will be reaping the rewards of more visitors to the region,” Mr Anderson said.

A co-contribution of $2 million from Whitehaven Coal brings the total project value for stage three to $10 million. Gunnedah Shire Council has contributed $1.5 million to the project, bringing the total value for stages two and three to $23.6 million.

Gunnedah Shire Mayor Jamie Chaffey said it was a historic day for the region.
“The Gunnedah Koala Sanctuary has been a long time in the planning, but the project has survived all the challenges of COVID-19 and skyrocketing costs and, today, we celebrate the announcement of an additional $8 million in NSW Government funding and the start of construction,” Cr Chaffey said.

“This is a tremendously important project for Gunnedah. It is an important step towards the conservation of koalas in the region, and the sanctuary will also be an education facility, with the added benefit of being a great tourism attraction.
“We look forward to seeing this sanctuary completed and opened, and thank the New South Wales Government for working in partnership with us to make this world-class facility a reality.”

Deputy Premier and Minister for Regional NSW Paul Toole said the Regional Tourism Activation Fund supports local economies and jobs by backing unique tourism experiences that will attract visitors and showcase what our regions have to offer.

“Regional NSW has the best destinations and experiences on offer across Australia, so it makes sense that we invest in new high impact projects that will drive tourism dollars into the regions,” Mr Toole said.

“Every dollar spent by visitors at local shops, cafes, accommodation and visitor attractions provides a much-needed boost to our regional economies following COVID-19 and severe weather events that have hampered the tourism industry in NSW.”

For more information, go to: www.nsw.gov.au/RTAFund