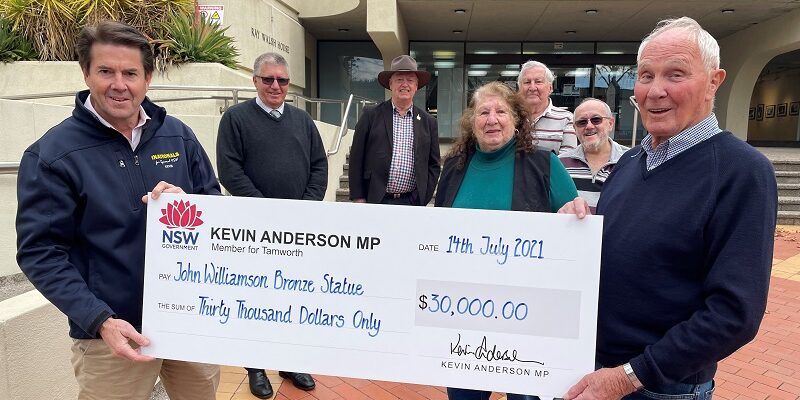 The John Williamson Statue proposal has received a significant kick towards its $99,000 fundraising goal thanks to a $30,000 NSW Nationals in the state government grant.

NSW Nationals Member for Tamworth Kevin Anderson said he was very excited about the project and pleased that the government was able to supply such a significant contribution to the project.

“John Williamson is a talismanic symbol in Australian Country Music providing the soundtrack to Australia’s rural identity over the past 52 years,” Mr Anderson said.

“I was thrilled to make the case to John Barilaro that this project deserved the NSW Nationals in the state government’s support and he enthusiastically agreed.

“We have funding coming in thick and fast for this project from all sorts of donors including big names in business and broadcasting and from mum and dads who can afford to chip in a spare $10 for the knowledge that they’ve been able to contribute to Peel Street’s unique identity.

“It’s also great that Gunnedah girl Tanya Barlett is on board to sculpt the statue, keeping our main street – and John – in the hands of the wider local community.

“I’m told we’re now at the halfway point for this project to be fully funded so I am encouraging the local community to spare what they can and chip in for this fantastic project. Every dollar counts and I thank all the contributors who have got us to this point.

“The initial announcement of this project saw media licking their lips all across NSW so I’m sure that the eventual unveiling of the statue at the 50th annual Tamworth Country Music Awards will put Tamworth back on the map after years of drought, bushfires, floods and COVID-19.”

Mr Anderson is encouraging the community to visit https://uk.gofundme.com/f/john-williamson-bronze-statue and donate what they can.