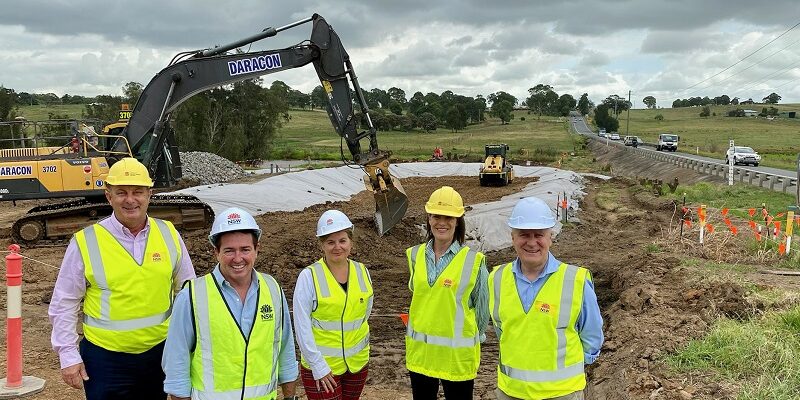 Communities linked by Cessnock Road will be the big winners with the NSW Nationals in the state and federal governments as work begins at Testers Hollow to reduce closures due to flooding and improve connectivity across a growing part of the Hunter region.

“The Australian Government is rolling out a record $110 billion pipeline of infrastructure projects right across the nation to get Australians to where they need to be sooner and safer while laying the economic foundations for recovery following the pandemic,” Mr McCormack said.

“Just weeks ago, construction began to build a new two-lane road, around 900 metres in length and 1.5 metres higher than the existing road, so the Maitland area and Hunter communities will enjoy a safer and more reliable Cessnock Road during flood events.”

NSW Nationals Deputy Leader and Minister for Regional Transport and Roads Paul Toole said the contract for construction of the new road was awarded earlier this year to Daracon Contractors Pty Ltd, with the project expected to be completed in early 2023, weather permitting.

“We’ve already hit the ground running with site preparation works along the length of the project and will continue to keep the community and stakeholders advised as it progresses,” Mr Toole said.

“I couldn’t be more excited that shovels are hitting the ground on this project so Hunter communities can have the roads they deserve.”

NSW Nationals Senator Perin Davey said once completed, the project will improve safety and access between the Maitland area, Hunter Expressway and the broader Hunter community during flood events.

“The project is expected to support around 50 direct and indirect jobs and an estimated 10 suppliers and contractors in the Hunter region while work is underway, pumping much-needed funds into the local economy during challenging times,” Senator Davey said.