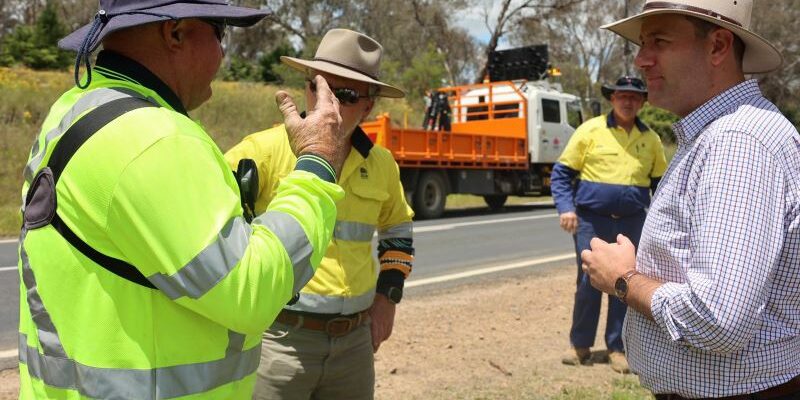 Road crews have been brought in from around the state to join efforts to repair flood-damaged local roads in the state’s Central West.

Deputy Premier and Minister for Regional NSW Paul Toole said Transport for NSW crews have been diverted from other parts of the state to tackle the worst-hit roads.

“These extra road crews are working with those already on the ground across the west – shovelling cold mix for pothole repairs, heavy patching, extensive rebuilding of some sections, bridge inspections and drainage clearing,” Mr Toole said.

“The majority of the work is taking place in the Forbes, Orange, Dubbo, Parkes, Cowra, Cabonne, Bathurst and Blayney LGAs – with priority given to those areas of the road network most impacted and in need of urgent repairs and rebuilding work.”

“We have had to think outside the box and be agile, working hand in glove with our colleagues in local councils,” Mr Farraway said.

“While the Newell and other state roads have been several centimetres under water, diversions have been created on local and regional roads to allow trucks transporting essential goods to reach their destinations to stock supermarkets and cart grain during harvest.

“It will take some time yet for flood-affected communities to get back on their feet, but we’re here to support them every step of the way.”

Nationals Minister for Western NSW and Member for the Dubbo Electorate Dugald Saunders said repairing the Newell Highway south of Forbes is a massive and ongoing project.

“The NSW Government is committing all of the resources we need to get the job done as quickly as we can,” Mr Saunders said.

“The Newell Highway, the backbone of the state’s freight network, remains closed for 60 kilometres between Forbes and Back Creek and Transport for NSW is committed to reopening it as soon as possible.

“Ongoing wet weather and slow-moving floodwaters have created challenges for crews but have not stopped work progressing throughout the closure period.”