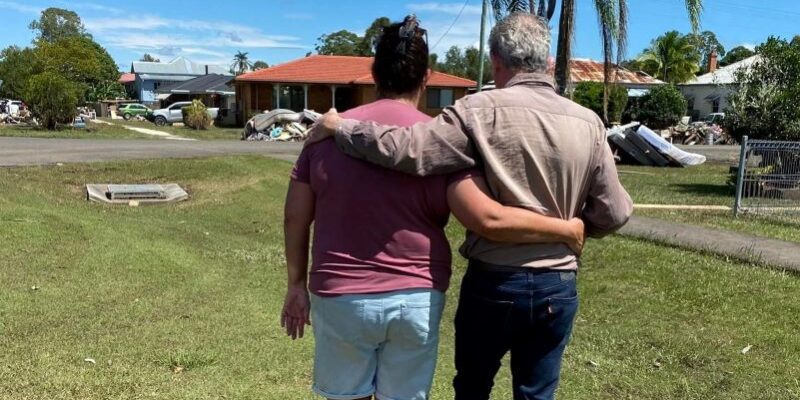 I was in Canberra this week for the budget. I tried to get home yesterday but was flooded out, today looks like a better chance. While in Parliament, I told our story. I spoke about our trauma, pain, anger, heroic actions of volunteers and community members.

I have had meetings with many cabinet members and recovery agencies. My message has been clear. While the unprecedented amount of financial support currently announced has been welcome, we need even more and we need it now. I have demanded continued disaster recovery support across our region.

Please click on this link for financial assistance that is available: https://www.kevinhogan.com.au/flood/

We can come back from this. Please know I am always here for you as we continue the recovery together.

One day at a time.

Please see below a transcript of the speech I gave:

On Sunday the 27th of February it was wet in my community. We’d had a lot of rain over the previous week, with heavy falls forecast over the next 24 hours.

We are used to floods; most homes are built above the 1-in-100-year levels of 12.2 metres. Shops have their flood plans. everyone moves their stock and machinery to flood free levels. Everyone was preparing, we know how to do floods.

The BoM as people were going to bed were predicting a peak of 11.5 metres, that’s under the 12.2 record levels. People were confident, they were prepared, and safe in their house.

In the early morning hours people started to awaken with water coming into their house. The flood level had been revised to 14.5 metres. 3 metres higher than when people were going to bed. This is 2.3 metres higher than we had ever seen before. We did not have a flood happening we had a natural disaster happening of which we had never seen or experienced before. All in the dark of night.

The immediate crisis was thousands of people were at risk of drowning in their homes. People were scrambling into roof cavities and onto roofs. It was a desperate situation.

And then they arrived. Instinctively, intuitively, over 200 local heroes, got into their tinnies, kayaks jet skis and started rescuing and saving their neighbours lives. And make no mistake they were putting themselves at great risk. This was a swollen angry river.

The storm was still raging, and rain was falling heavily. But out they went saving person after person, family after family. 4 fatalities happened that day, all tragic. It was a miracle there was so few.

Besides the 200 local heroes, the SES, other first responders like the police, fire and rescue and others, all did amazing things.

I made urgent calls before daybreak to get aerial ADF support to help with evacuations. The arrived that morning and assisted which is crucial.

Evacuation centres instantaneously sprung up. Around 10,000 people were going to be homeless by the end of the day.

Some of the evacuation centres had no outside support for days as they were stranded by flood waters. Hundreds of people I could name here right now deserve recognition for what they did, and I am going to ensure they all do get the recognition they deserve.

3 to 4 days later on the Thursday, the flood water started to recede to the point where supplies started to arrive into our towns.

The ADF could get in with their larger equipment to help with the clean-up, over 4000 of them, and we thank them.

People had lost everything in their homes and businesses. Places in supposedly flood free areas were wiped out. People weren’t going to open their business in days, it was going to be weeks and months.

People who had homes flooded aren’t going back in their homes for weeks if not months. As a Government we declared Category A, B and D disaster in record time.

Many packages have been announced to help families, businesses and farmers. Financial support has started. Over a billion dollars already, but much much more still needs to come.

Support has arrived but speaker much more needs to not just over the next weeks and months but indeed years.

The clean up after 4 weeks with even 4000 ADF helping is only 50 percent complete.

Financial packages will encourage some to restart, some will decide not to. Over 200 million dollars has already been announced to do flood modelling and work on flood mitigation. We can never flood proof our town, but we can and must do more on flood mitigation for us to rebuild with confidence.

And sadly, overnight, we have been flooded again. The levee is overtopped and will be going to 12 metres today. This has triggered more trauma in my community to those who have nearly drowned and for those who saved them just 4 weeks ago. Reliving the flooding rains and the evacuations again.

I love my town and we will come back, but it is going to take us time. We’re going to have to help our neighbours and our friends to stand again. One day at a time.

“An absolute game changer” for stroke patients in rural and regional NSW
31 Jan, 2023