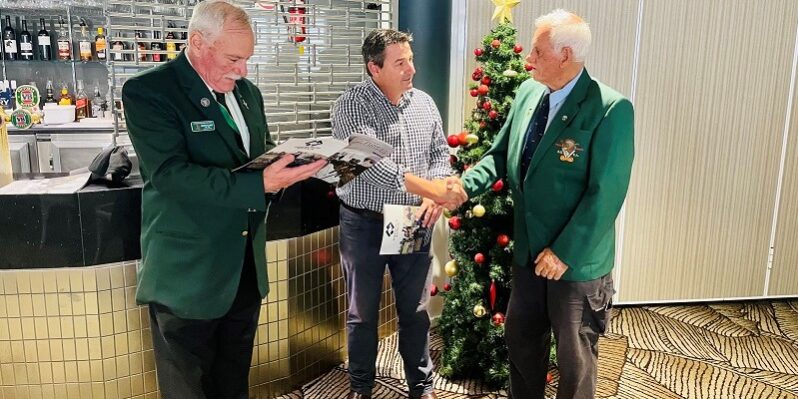 At the conclusion of the meeting, Martin Blandy and Peter Pool, both former members of the 1st Commando Company and dressed in their green Special Forces blazers, asked for an audience with Pat and to make a personal announcement to the room.

Mr Blandy spoke about the November 2020 announcement that the Meritorious Unit Citation (MUC) may be stripped from all members of Task Force 66, who served with the Special Operations Task Group in Afghanistan..

Mr Blandy spoke of his opposition to the removal of the Citation, and in particular, the ramifications this would have on Mr Pool’s son who was severely wounded in Afghanistan while serving with 1st Commando Regiment.

In early February this year, Mr Conaghan arranged a meeting with Sub-Branch members from his electorate to hear their concerns, and arranged a further meeting in March that then Minister for Veterans’ Affairs Darren Chester attended.

As a result of the March meeting, at which Mr Pool gave an impassioned speech, the current and former serving personnel who are entitled to wear the Meritorious Unit Citation can continue to do so.

After thanking Mr Conaghan for his efforts and advocacy, Mr Blandy produced the Australian Special Forces Magazine, to which he is a contributor, and showed Mr Conaghan his article outlining the events.

Mr Blandy said “I wanted to come here today to personally thank you, and present you with a copy of our magazine in recognition of your efforts on our behalf.”

Mr Conaghan said “It’s things like this that make this job one of the best jobs in the world.”

“Being able to represent the people of my community is an honour and I’m just glad that in this instance I was able to help and this outcome was achieved so quickly,” he said.