Inland Rail steams ahead with the Nats in government 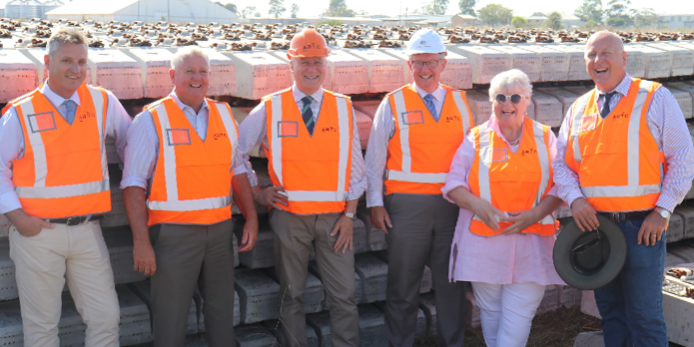 Progress on the NSW Nationals in the federal government’s Inland Rail project continues, with the second section of the 1700 kilometre Melbourne to Brisbane freight line between Narrabri and North Star (N2NS) now under construction.

Deputy Prime Minister and Infrastructure, Transport and Regional Development Minister Michael McCormack and local NSW Nationals MP Mark Coulton were on site in Moree to turn the first sod of soil on the 171 kilometres of track upgrades.

This stage of the NSW Nationals in the federal government’s transformational Inland Rail project will support more than 500 direct jobs from the contractor, with many others to follow for sub-contractors and businesses in the regions. And it will deliver millions in economic stimulus to north-western NSW.

“It seems like just yesterday I turned the first sod on Inland Rail in Parkes and today we celebrate another momentous occasion with the commencement of the second section between Narrabri to North Star, an equally significant event,” Mr McCormack said.

“This year we completed the first section of Inland Rail between Parkes and Narromine, which has enhanced the connectivity of the national network, joining the east-west Perth line to the north and south spine.

“Today’s event in Moree marks real progress on the Inland Rail project which has been talked about since Federation.”

Mr McCormack said regional Australians were benefiting now, when they need it most, from the record-breaking investment the NSW Nationals in the federal government were making into infrastructure – including Inland Rail – right across the nation.

“The $693.8 million construction effort on Narrabri and North Star brings immediate stimulus to the regional communities of Narrabri, Bellata, Moree, Croppa Creek and North Star and those townships in between,” Mr McCormack said.

“In real terms, it means more money spent locally, more money spent with local, regional and Australian businesses at the same time as building an asset that will benefit our nation for generations.

“As we build Inland Rail, we lay the track for supply chain efficiencies that will boost the national economy.”

The Inland Rail project is critical infrastructure that will deliver major benefits to the nation and help boost the Australian economy.

Once complete, it will deliver cost savings for freight customers including Australian farmers, small businesses and manufacturers, while also providing economic stimulus at a time when Australia needs it most. Inland Rail’s fast, reliable and cost-competitive freight will increase the safety and efficiency of the national freight network and ensure Australian businesses can remain globally competitive and deliver their products to markets in Australia and overseas with more ease.

Local NSW Nationals Member for Parkes Mark Coulton said the milestone in Moree at the heart of the Narrabri to North Star section showed Inland Rail was on track for all the right reasons.

“Inland Rail is one of the main reasons I got into politics, so this is a very proud moment for me, and a key achievement for the NSW Nationals in the federal government,” Mr Coulton said.

“It’s a project that will open up eastern Australia for business and allow farmers to get their products to domestic and international markets, which is welcome news for the councils in North West NSW that represent a region rich in agriculture.

“Inland Rail is necessary to meet Australia’s growing freight transport task for the next 50 years, and all levels of government are working together to leverage the long-term benefits of Inland Rail to attract new businesses to regional Australia.

“From the special activation precinct in Moree to Narrabri’s Inland Port, private businesses and industry are setting up shop because they can see the long-term growth Inland Rail is bringing to these regional communities.”

The N2NS section of Inland Rail is being delivered through two distinct packages of work, with construction now underway on the initial upgrade to 171 kilometres of existing track.

Further design work is progressing on the second package of N2NS construction which will see the preparation of an Environmental Impact Statement for the construction of new track between Moree and Camurra.