Hundreds of suggestions for name of new Gunnedah overpass 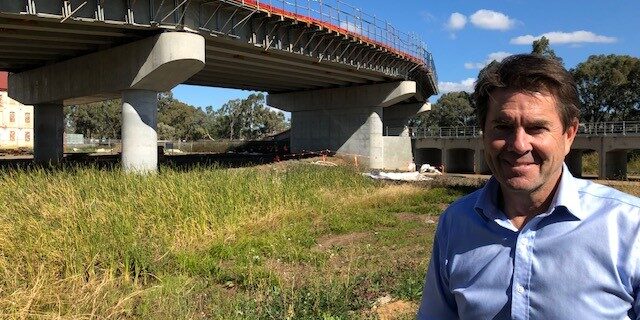 The naming of the new Gunnedah bridge is a step closer, with a community submissions report handed to Gunnedah Shire Council.

“Locals and freight operators have enjoyed safer, faster journeys through Gunnedah since the 195-metre-long bridge opened to traffic ahead of schedule, and the next step is to now name it,” Mr Anderson said.

“We asked the community to suggest names for this significant piece of local infrastructure and received more than 200 strong and diverse submissions that reflect the town’s heritage.

“Many of the names suggested were a tribute to the Gunnedah community – from the origins of the town’s name to traditional owners of the land and pioneers of the area, including Nancy Small, Red Chief, White Stones, Reginald “Dick” Talbot and Doc Anderson.”

Mr Anderson said the new bridge delivered a better connection between the Oxley and Kamilaroi highways for higher productivity vehicles.

“Any truck driver who has been through Gunnedah since this bridge was opened knows how vital it was to opening up the town to more investment from freight companies,” Mr Anderson said.

“The bridge is minimizing congestion on Abbott Street bridge by diverting heavy traffic away from that bridge which improves the safety of the road network for other motorists by closing the level crossing at New Street.”

Gunnedah Shire Council will consider the 200 submissions against a set of naming guidelines before recommending a name to Transport for NSW for approval.

Council may suggest one or two names for the bridge – which may be both an Aboriginal name and a European name – but is not required to recommend the most popular name suggestion.

For more information on the project’s progress and to view the submissions summary report, visit: nswroads.work/gunnedah-bridge.