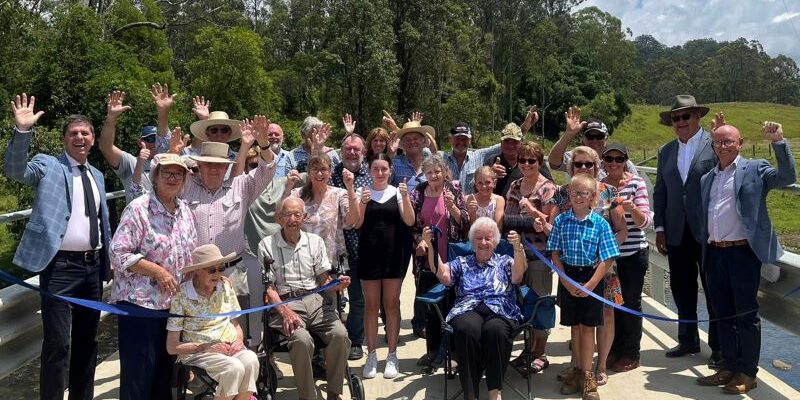 A new $1 million bridge has been officially opened in the Dungog Shire, as part of a 23 bridge replacement program funded through the NSW Nationals in the state government’s Fixing Country Bridges program.

Nationals Member for Upper Hunter Dave Layzell said the new bridge has secured a brighter future for Dungog and ensured the community remained connected well into the future.

“Bridge replacements like this are critical for maintaining community access and ensuring everyone can safely get to where they need to go,” Mr Layzell said.

“Today we have officially cut the ribbon on this new bridge and it is fantastic to see this investment transform travel for Dungog shire and surrounds, ensuring locals, visitors and freight operators can travel safely in our region.

Nationals Minister for Regional Transport and Roads Sam Farraway said the opening of Archinals Bridge was a milestone worth celebrating as part of Dungog Shire’s massive program to replace old timber bridges with new concrete ones.

“Thanks to this $19 million investment Dungog now has a stronger and safer bridge meaning better connectivity for road users travelling in the area,” Mr Farraway said.

“The NSW Nationals in government are building the infrastructure that matters to make daily life easier in regional NSW through programs like our $500 million Fixing Country Bridges fund.

“By supporting councils across NSW to replace ageing timber structures with concrete bridges, we are opening up more efficient freight routes and ensuring our infrastructure better withstands extreme weather.

“Bridges play a critical role in the economic and social wellbeing of a community. Better bridges mean improved access to schools, towns, hospitals and jobs and productivity benefits for farmers and freight transporters.”

Mayor of Dungog Shire Council John Connors thanked the NSW Government for the $19 million funding under Fixing Country Bridges, which was transforming the shire through stronger, safer bridges built with modern materials.

“We are working hard to keep Dungog connected following the destructive floods earlier this year. There’s never been a more important time to invest in the resilience of Dungog’s transport connections,” Cr Connors said.

The new Archinals Bridge on Allyn Creek Road near Eccleston replaces a timber bridge which was built in 1940 for £2,000 and was named after the Archinal family, whose land surrounded the original bridge.