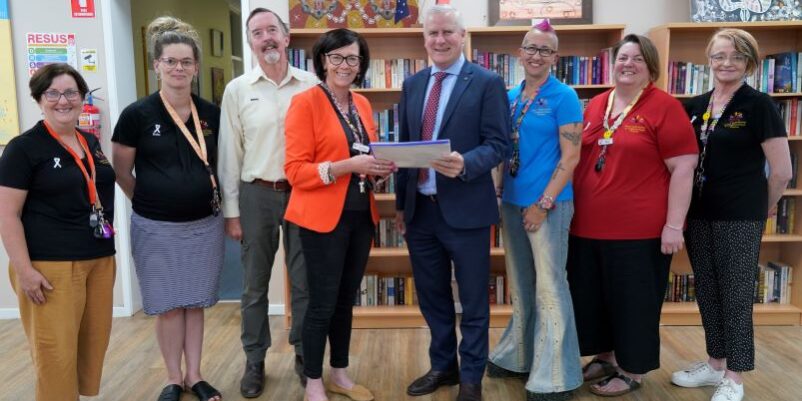 The Cowra Information and Neighbourhood Centre plans to install a soft-tiled and disability-safe basketball and netball court after receiving approval for a NSW Nationals in the Federal Government’s Stronger Communities Programme (SCP) grant.

Member for Riverina Michael McCormack said the centre has been approved for a $20,000 SCP grant, which was the total estimated cost of the community access court project.

Centre manager Fran Stead said her organisation was absolutely delighted to have been awarded the grant.

“The accessible sports court will make a huge difference to members of our community who may have been overwhelmed to try different sports and activities in other settings,” Mrs Stead said.

Mr McCormack said $149,500 had been approved for 11 projects in the Riverina and Central West through Round 7 of SCP – a program for not-for-profit organisations which funds small capital projects delivering important social benefits in each of the 151 Federal electorates across the country.

Mr McCormack nominated the 11 projects after he and a community consultative committee considered 45 expressions of interest seeking funding of $620,000 towards projects worth $994,000.

Mr McCormack said the Stronger Communities Programme had delivered more than $1 million to not-for-profit organisations in the Riverina and Central West through the first seven rounds of the program.

He said the programme had been extended in the 2022-23 Federal Budget handed down last week.

“I am delighted an eighth round of the Stronger Communities Programme will be funded because it is such a valuable source of funding for these community organisations which just need a helping hand to achieve big things,” Mr McCormack said.

“The programme is very popular. I am often asked: when will the next round open?

“Among the approved projects, this round will allow a preschool to create an outdoor learning space, a show society to fit out a kitchen, a retirement village to modify a transport vehicle for residents and a CWA branch to paint the outside of their building.

“In some cases, these community-building projects simply would not have been possible without the support of a Stronger Communities Programme grant.”