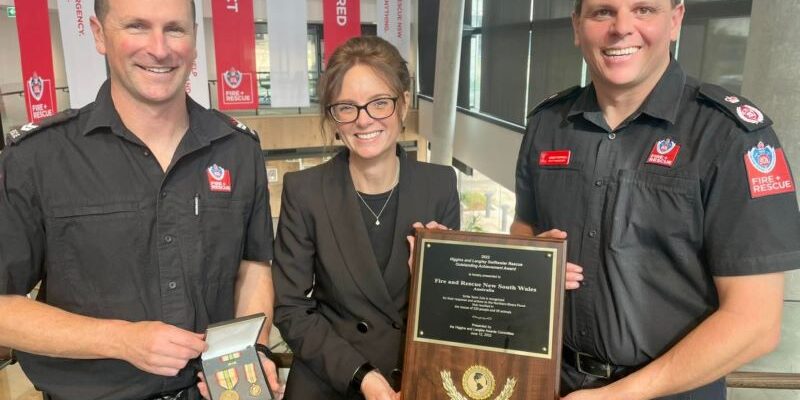 Fire and Rescue NSW in-water rescue teams have been presented with a prestigious international first responders’ award for saving hundreds of people during the 2021 Port Macquarie floods.

The Higgins and Langley Memorial Award, presented in the U.S. city of Indianapolis each year, recognises individuals, teams, and first response agencies around the world that demonstrate outstanding achievements, skills and preparedness in relation to swift-water and flood rescues.

The Award was established in 1993 by members of the Swiftwater Rescue Committee of the National Association for Search and Rescue (NASAR) in honour of Earl Higgins, a writer and filmmaker who lost his life in 1980 while rescuing a child who was swept down the flood-swollen Los Angeles River, and Jeffrey Langley, a Los Angeles County Fire Department firefighter-paramedic and swift water rescue pioneer, who lost his life in a helicopter incident in 1993.

This year’s Award has been given to 17 members of Fire and Rescue NSW’s Strike Team ‘Zulu’.

Nationals Minister for Emergency Services and Resilience and Minister for Flood Recovery Steph Cooke said the Award demonstrates that FRNSW personnel are among the world’s best.

“No lives were lost and no firefighters were injured during this mammoth operation, which is truly a credit to their professionalism and skill.”

FRNSW Commissioner Paul Baxter has expressed his pride in the Strike Team’s courage and commitment during the flooding event.

“The members of Strike Team ‘Zulu’ epitomised being ‘prepared for anything’ and it was no accident that they were there in the right place at the right time to rescue so many people out of harm’s way,” Commissioner Baxter said.