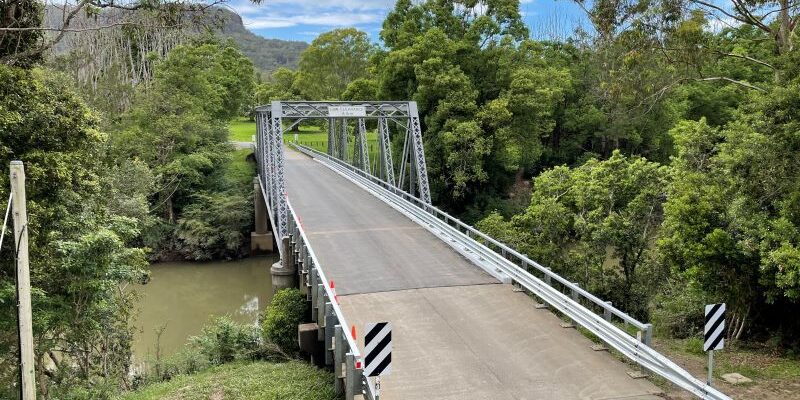 The Glenreagh Bridge is back to its former glory following the completion of painting on the 104-year-old structure.

Clarence Nationals MP Chris Gulaptis said the steel truss bridge was built at the end of World War I and is unusual for a bridge of its time.

“Most of the road bridges built in that era were made with either concrete or timber because of the shortage of steel, which was required for the war effort,” Mr Gulaptis said.

“But the Glenreagh Bridge was different. It was built by the rail authorities to provide a connection between the railway station on the eastern side of the river and Glenreagh village to the west.

“Rail authorities at the end of the war had access to steel because railways were an essential piece of infrastructure and they were given priority access.

“It’s one of the reasons it’s important to keep these bridges in good condition. They continue to provide a vital role in keeping communities connected, but also provide an important link to the past.”

“The lead-based paints originally used on old bridges like this present some challenges when it comes to removing it,” Mr Farraway said.

“It requires an innovative solution to remove the paint while not polluting the surrounding environment.

“To do this we essentially shrink-wrapped the bridge to catch the waste material and vacuum it into a filtration system to dispose of it at a registered facility.

“Our government is investing in new and upgraded infrastructure, but we’re also maintaining historically significant bridges that are part of the fabric of our communities.”

The Glenreagh Bridge is now open to traffic in each direction, however, crews will still be on site while some minor work is carried out.