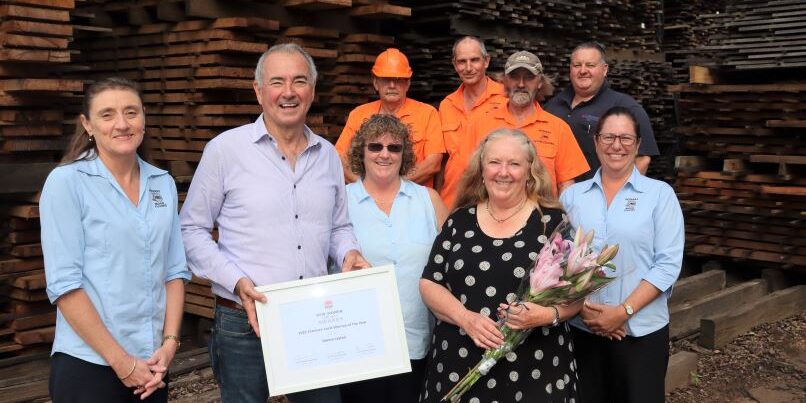 Clarence Nationals’ MP Chris Gulaptis said Donna was a big believer in personal and professional development and had obtained a university degree in business management.

He said this helped her save jobs and possibly the company through the drought and subsequent challenges.

“You pretty much led the effort to keep the saws spinning at J Notaras and Sons through the drought, bushfires and COVID; it was such a challenging period and you achieved this despite losing your own property in the 2019 Black Summer flames,” Mr Gulaptis said.

“With a 40 per cent downturn in available timber for the saw mill, Donna was able to maintain worker wages and keep the business running by operating a four-day week through the worst of the downturn. The employees always came first.”

When COVID cases hit the business forcing skilled employees to isolate, Donna found a solution by recruiting new staff and training up others with extra qualifications.

Donna has been very loyal and dedicated to her employer as well as to her fellow employees.

J. Notaras and Sons have been a major employer in the Clarence Valley and a significant economic contributor for decades and that’s largely attributed to the stewardship of Donna Layton.

Her devotion to her workers and the industry were recognised in the 2021 Harvey Norman Weekly Times Shine Awards when she won the award for Dedication.

Mr Gulaptis said Donna was a rare sight in the still male-dominated timber industry but had won the admiration and respect of her peers for the way she has run J. Notaras and Sons and for her advocacy of the timber industry in NSW.