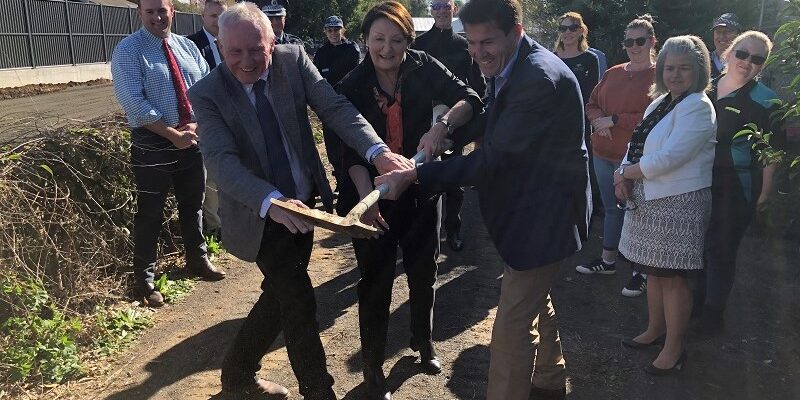 Gunnedah’s new women’s and children’s shelter is a step closer to completion with the first sod being turned on the project.

It comes after $196,314 was allocated to the project from the NSW Nationals in the state government’s Stronger Country Communities Fund Round 3 in February of last year.

NSW Nationals Member for Tamworth Kevin Anderson said there was a zero-tolerance approach to domestic violence and this funding will help fill a crucial gap in support in Gunnedah for those escaping domestic violence situations.

“This new shelter provides women and children in Gunnedah with a place to stay in Gunnedah when they previously may have had to travel to Tamworth Family Support Service’s Women and Children’s Refuge,” Mr Anderson said.

“Jobs Australia Enterprise, the Allawah Cottage Committee and the Gunnedah community have been calling for this service for some time and I am thrilled that the NSW Nationals in the state government was able to make a significant contribution to help support women and children who have been the victims of domestic violence in Gunnedah.

“Today’s announcement accompanies a $90 million boost for domestic violence services across the State which will see a $32.5 million boost to the Staying Home Leaving Violence (SHLV) program which works with NSW Police to remove perpetrators from the home allowing women and children to remain in their own homes while having access to ongoing support.”.

Tracey Reid from Jobs Australia said the support of the whole Gunnedah community has been absolutely overwhelming.

“The shelter will provide a 24-hour emergency contact through Jobs Australia Enterprises and residents will be supported by the Salvation Army’s Doorways program,” Ms Reid said.

If you or someone you know is experiencing domestic or family violence, please contact the 24 hour Domestic Violence Hotline on 1800 65 64 63 when it is safe to do so.