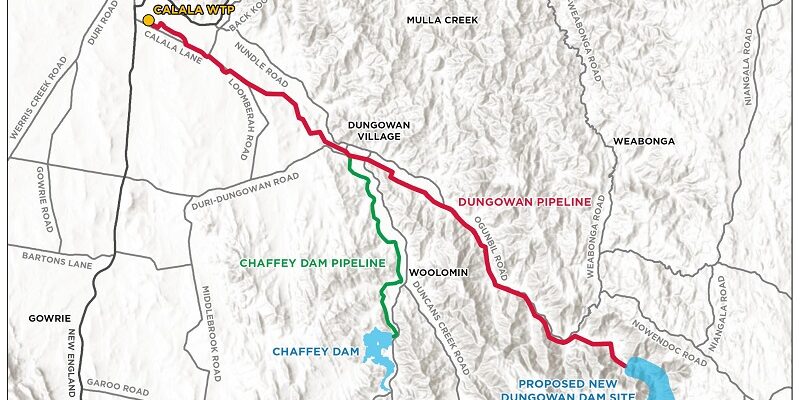 Plans for greater water security in Tamworth and the Peel Valley have reached a significant milestone with the announcement of the final route for the new 55-kilometre Dungowan Dam pipeline.

Deputy Prime Minister, Minister for Infrastructure, Transport and Regional Development and Federal Member for New England Barnaby Joyce said the announcement of the final pipeline route was an important step towards building the infrastructure required to deliver better drought resilience to the Peel Valley.

“It means the community, farmers and businesses of this region can plan for future droughts and be confident they won’t run dry.”

“In 2020 many communities in NSW were fast running out of water. We never want to see any regional city or town go through that again,” Mr Toole said.

“The proposed Dungowan Dam and the pipeline is just one part of the government’s vision to ensure rural and regional NSW can continue to grow and prosper for years to come.”

Mrs Pavey said in 2020 we were facing the real possibility of Tamworth running out of water and there were no obvious or quick solutions.

“This water insecurity threatened thousands of jobs and brought real hardship to our farmers and communities,” Mrs Pavey said.

“The Dungowan Dam pipeline is part of a once-in-a-lifetime opportunity to deliver critical infrastructure and bring generational improvements in water and economic security for the people of Tamworth and the Peel Valley.”

Mr Anderson said the project is a great example of the government’s continued commitment to providing water security for regional NSW.

“In addition to the obvious benefits to water security, this project will provide much-needed employment and a boost to the local economy as it continues to recover from the impacts of drought, floods, fires and COVID-19,” Mr Anderson said.

The preferred route was finalised after months of extensive studies, assessments, technical investigations and community consultation. Landowners were also consulted on the impacts of the pipeline to their property and how they could be mitigated.

Tamworth Mayor Col Murray said the proposed Dungowan Dam project will be paramount to the city’s future prosperity and growth.

“It’s the deal breaker for our city to grow and develop,” Mr Murray said.

“Nothing survives without water. If you don’t water your flowers, the flowers die. The same thing happens to a city.”

Construction of Stage 1 of the Dungowan pipeline is expected to start by early next year and will take 12-18 months (COVID permitting).