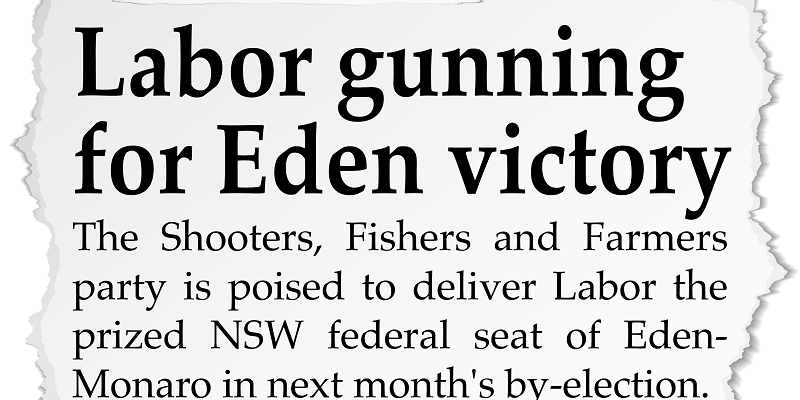 NSW Nationals Upper House MP Wes Fang has taken aim at the Shooters for their support of Labor.

The Shooters have recycled an out-of-area candidate to contest the Eden-Monaro by-election, but Mr Fang says it’s simply a way to shore up their friends in Labor.

“The Shooters showed no interest in running for Eden-Monaro last year, and now they’ve roped in their Cootamundra candidate to send preferences to the Labor party,” Mr Fang said.

“It’s disappointing, but not surprising. The Shooters preferenced Labor last year and this is just a continuation of the close relationship we see every day in Parliament.”

According to Mr Fang, the Shooters have a history of coordinating their efforts with Labor and the Greens, as seen from their recent support of Labor’s Sydney buses campaign, and their refusal to censure Greens MP David Shoebridge this week.

“The Upper House voted to censure Mr Shoebridge for failing to deal with a staffer who vandalised a statue of Captain Cook, and for visiting a remote Indigenous community just days after attending a mass protest in Sydney,” Mr Fang said.

“Mr Shoebridge should have known better than to expose an at-risk community to a potential coronavirus infection, and he certainly shouldn’t have turned a blind eye to vandalism carried out by his employee.

“We all voted to censure Mr Shoebridge, to make a stand on common sense values, but the Shooters’ Mark Banasiak was nowhere to be seen.

“Instead of joining the chorus of voices calling out this sort of behaviour, he hid in his office so he wouldn’t upset his Greens mates.”

Mr Fang said it wasn’t the first time the Shooters had co-ordinated votes and media conferences with the Greens, and he said their lack of values was starting to show.

“They say one thing in the bush, but another behind closed doors in Sydney,” Mr Fang said.

“Helen Dalton hasn’t delivered a single promise she made during the campaign, and at some point, she needs to stop complaining and blaming everyone else and start doing her job, which is delivering for her electorate.

“Sadly, it seems they’d rather play politics and support Labor while they attack the Nationals, rather than get involved in the meaningful work of actually getting things done. That’s what we do, we fight to deliver for our communities, we find solutions and ways to make a difference.”