You are here:
Nationals Membership 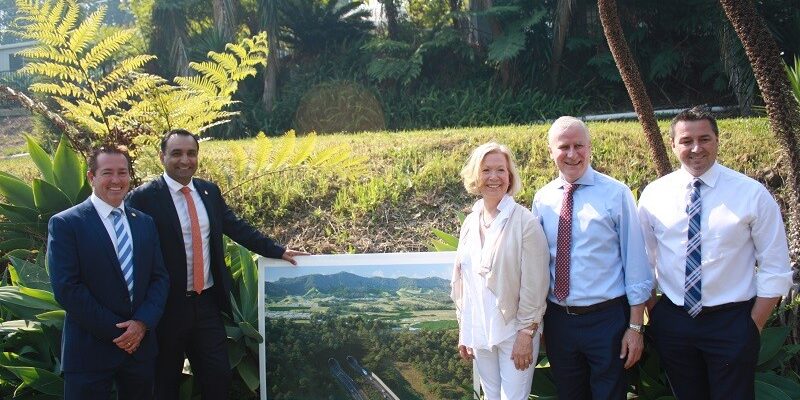 The Coffs Harbour Bypass is a step closer to construction, with the public release of two reports detailing how community feedback has shaped design.

Deputy Prime Minister and Nationals Leader Michael McCormack said the release of the Environmental Impact Statement (EIS) Submissions and Amendments reports were critical steps in achieving planning approval for the bypass of the Coffs
Harbour CBD.

“The bypass will create more efficient and reliable journeys by bypassing 12 sets of traffic lights, removing about 12,000 vehicles from the CBD and saving more than 10 minutes in travel time,” Mr McCormack said.

“These reports are another indication of the level of community involvement in the 14-kilometre, fourlane project, which has already seen the original concept design modified to include tunnels at Roberts Hill, Shephards Lane and Gatelys Road.

“We’re looking forward to getting this project under way and delivering for the people of Coffs Harbour.”

NSW Nationals Minister for Regional Transport and Roads Paul Toole said the release of the reports was the last step before formal approval of the project, which will boost the local economy, create jobs, increase local skills and improve regional connectivity.

“We’re at the final gate now with the reports up for formal approval, which means we’re on track to see shovels in the ground by the end of the year,” Mr Toole said.

“This bypass, jointly funded by the Federal and NSW Nationals in Government, is the biggest infrastructure project in Coffs’ history and will have a huge economic impact. It will support about 12,000 jobs over the whole life-cycle of the project, providing about 2000 indirect and direct local jobs for the community of Coffs Harbour during construction which shows how serious we are about investment in regional NSW.”

Federal Nationals Member for Cowper Pat Conaghan said the submissions received in response to the EIS for the project covered a range of issues including noise and vibration, biodiversity, traffic and transport.

“The community is now invited to view the Submissions Report to learn how Transport for NSW has responded to the topics raised,” Mr Conaghan said.

“In addition to the EIS, further design changes to the bypass went on display in November 2019, including improvements to the Englands Road and Korora Hill interchanges.”

NSW Nationals Member for Coffs Harbour Gurmesh Singh said the local community had also responded to these changes, with 31 submissions made directly to the Coffs Harbour bypass project team.

“The Amendment Report outlines and assesses design changes made as a result of feedback received from the community and stakeholders,” Mr Singh said.

“The Coffs Harbour Bypass will make our region an even better place to live, work and visit, and the release of these reports demonstrates that we’re on track to commence early works by the end of the year.”

The full reports are available to view at the display office, 11a Park Avenue in Coffs Harbour, or on the project website https://www.pacifichighway.nsw.gov.au/coffsharbourbypass.

Transport for NSW is submitting the Submissions and Amendment reports to the Department of Planning, Industry and Environment, which will consider them during its assessment of the project before the Minister for Planning and Public Spaces decides whether the project is approved. Transport for NSW expects that advice later this year.

Singleton bypass locked in thanks to Nats
24 Nov, 2020