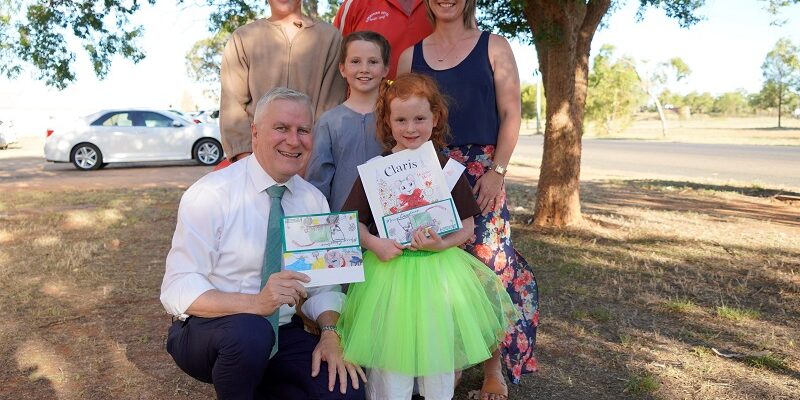 A delightful drawing of Santa Claus driving a header through a canola crop has won this year’s Christmas drawing competition conducted by Deputy Prime Minister and NSW Nationals Member for Riverina, Michael McCormack.

“Lexi’s drawing captured the spirit of Christmas this year in a unique Australian way – a return to a good harvest and Santa with a big smile on his face,” Mr McCormack said.

“There are many others with smiles on their faces in the Riverina and Central West this year because of the good season and it is so good to see those smiles return after the years of drought we have endured.”

Lexi is the daughter of Sarah and Dane Anderson and the sister of Luke, 11, and Macey, 9, who are also students of Weethalle Public School.

“Lexi told me she wanted to be a farmer when she grew up,” Mr McCormack said.

“I won’t hold her to that, but it is terrific to hear a young person loving the farming life so much she wants to make a career of it.”

More than 1550 Kindergarten, Year 1 and Year 2 students from right throughout the Riverina electorate entered this year’s drawing competition, the seventh conducted by Mr McCormack.

The theme of the competition was Christmas in the Riverina and Central West.

Mr McCormack said he was again overwhelmed not only by the large number of entries but also by the quality of the drawings and the joy of Christmas which showed clearly in the images.

Maisie and Noah also won books for their outstanding entries.

Each student who entered the competition has been given a colourful certificate to acknowledge their entry and contribution to the Christmas spirit.

“Thank you to every student who submitted an entry and thanks, also, to all the school staff who support the competition every year – without them the competition would not be as successful as it has been,” Mr McCormack said.