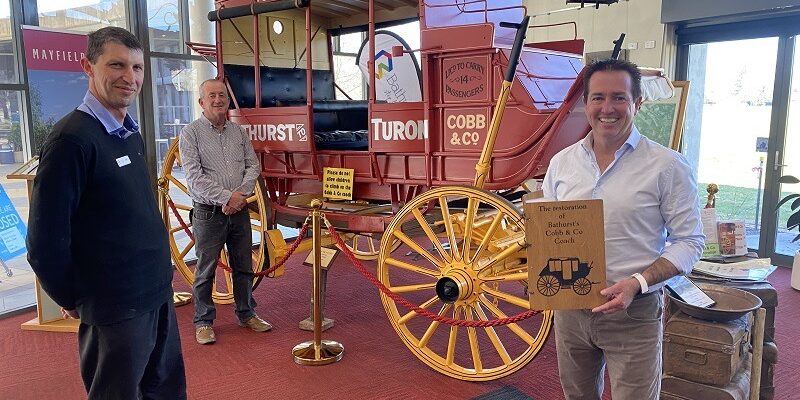 A rare surviving and beautifully restored 1860s Cobb & Co Coach in Bathurst has been listed on the State Heritage Register, in recognition of its great historical significance in NSW.

As romanticised by Australian poet Henry Lawson in The Lights of Cobb & Co in 1897, the story of the Cobb & Co mail and passenger transportation company is etched in the colonial history of Australia.

NSW Nationals Member for Bathurst Paul Toole said the coach was a reminder of Bathurst’s rich pioneering history and was a great asset to have on display for both visitors and locals alike.

“Restored and proudly displayed by Bathurst Regional Council at the Visitor Information Centre, the Cobb & Co coach was built in Bathurst and ran the Bathurst to Sofala mail and passenger route throughout its lifetime,” Mr Toole said.

The coach reflects the beginnings of Cobb & Co in NSW, which relocated its headquarters and factory from Victoria to Bathurst in 1862. Under the management of the company owner, the ‘great country entrepreneur’ James Rutherford, Cobb & Co grew into the most famous coaching firm in Australia and the largest company of horse-drawn transport in the world.

This coach is particularly significant not only to Bathurst but all of regional NSW, and safeguarding this item for display is of great importance to the historical story of NSW. Having been built around 1862, it is likely that this particular coach was one of the first coaches produced in Bathurst.

Listing will ensure that the significance of the Cobb & Co coach will continue to be recognised and protected for future generations.