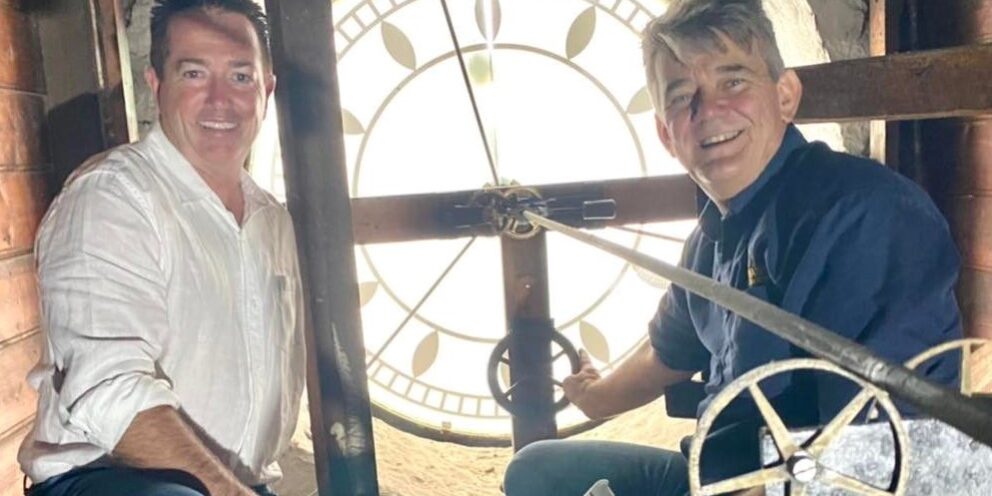 The Bathurst Courthouse clock is showing its face once again.

The 138 year old timepiece, hidden behind scaffolding for months, has been given a facelift by master clockmaker Andrew Markerink.

Over the weekend Deputy Premier and Nationals member for Bathurst Paul Toole met Mr Markerink to inspect his work.

“To have the clock face unmasked and working again is not only historically significant but very exciting for the people of Bathurst,” Mr Toole said.

“A local jeweller and watchmaker will be trained to carry out regular maintenance on the clock so it can remain in top condition for many years to come.”

While most of the work on the 500-kilogram timepiece was completed earlier this year, it remained hidden by scaffolding while other construction continued at the front of the courthouse, which is considered to be one of the finest Victorian courthouse buildings in NSW.

The clock was supplied by Angelo Tornaghi, who installed and maintained some of the more important clocks in NSW,  and installed by his son Remo during the courthouse construction in the 1880s.

The courthouse is undergoing a $6.43 million worth of other conservation works, including repairing sandstone, copper, metal, leadwork and timber elements; replacing the deteriorated sandstone cornice around the base of the copper dome; making repairs to 27 chimneys; and maintenance of the copper-clad bell tower.