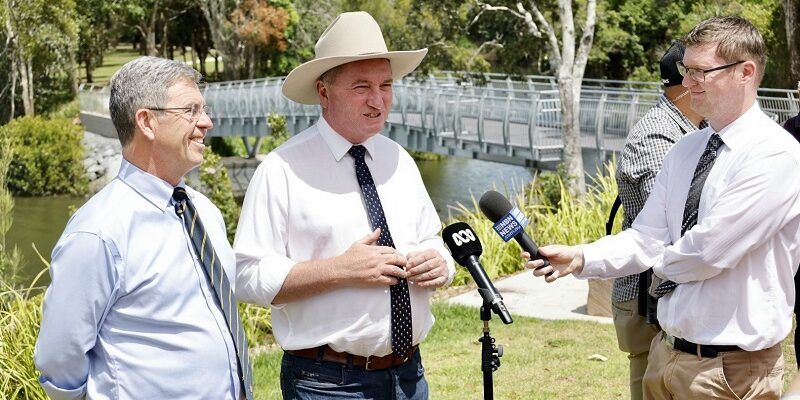 The NSW Nationals in the federal government are continuing to back major capital works transforming the Manning Great Lakes into a regional capital.

Mr Joyce said he was delighted to see the town centre transformations underway.

“These are important investments toward establishing a regional capital in the Manning Great Lakes,” Mr Joyce said.

“We are creating education and tourism spinoffs, as well as local construction jobs, that will help future-proof the region’s economy. It’s wonderful to be here to see these projects underway.”

Dr Gillespie said construction of the public infrastructure facilities for the Figtrees on the Manning development was almost halfway complete.

“We’ve got a new boardwalk, footpaths and cycleways, as well as new solar lighting going up along the Nelson Street bridge and into town. In coming months, the community will see the pace of construction really pick up with final roadworks to the precinct scheduled for completion by mid-next year,” Dr Gillespie said.

“When complete, this essential infrastructure will unlock more than $455 million worth of development throughout the precinct which will include new residential apartments, cafes, restaurants, retail and offices and ultimately a marina, as well as new open spaces, pedestrian and cycleway corridors connecting the Taree CBD with the city’s regional sporting facilities.”

“Taree Universities Campus is approaching its first anniversary and already there are 96 students now enrolled. Unfortunately, its current location is not a permanent solution and Council and the TUC Board have identified Council’s former office building as a potential option for its long-term future,” Dr Gillespie said.

“This is a critical project which I’m hoping we can secure further funding support for, so that we can continue to grow our industry and academic skills base to meet the needs of the region’s economy both now and in the future.”

The Forster Civic Precinct project is ultimately a $100 million investment which includes $18 million in public infrastructure including a new library, tourist information centre, community facilities and MidCoast Council Customer Service Centre. A restaurant, office space and 56 residential apartments will be included as part of the first stage of the project.

“Our government, MidCoast Council and the developer of the site have each invested $6 million towards these facilities. Over 100 construction jobs have been generated on the site and this will increase to over 200 by January 2022. Following completion of the first stage, more restaurants and cafés, offices, retail shops and a supermarket will form part of stage two, along with retirement living apartments.”

“Forster’s growth phase means more people will be living in and around the civic precinct and the Federal Government is strongly backing this plan for growth.
“I’ve been listening to the community about improving amenities around the foreshore, bringing back the sparkle, and this federal funding will allow the planned building program to be completed all in one go.”