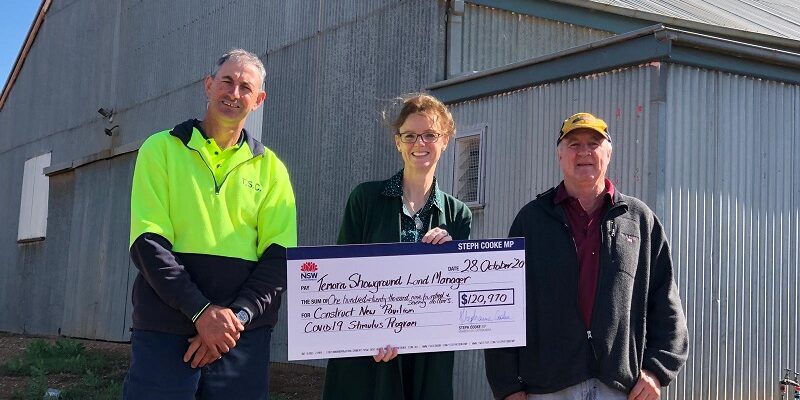 Temora Showground has received a further $120,970 under Round Two of the NSW Nationals in the state government’s Showground Stimulus Package.

NSW Nationals Member for Cootamundra Steph Cooke visited the showground to announce the funding, which will be used to construct a new pavilion.

“This brings the total amount of funding for Temora Showground under the stimulus program to $223,886 after an initial amount of $54,956 was granted to upgrade the kitchen in the supper room, roof guttering, drainage repairs and install air conditioning and a further $47,960 to replace the kiosk and bar area,” Ms Cooke said.

“The NSW Nationals in the state government’s Showground Stimulus Program recognises the important role that showgrounds play in our local communities. They are used for such a range of purposes including community gatherings and meetings, recreation, entertainment and sport.”

“The old pavilion was an eyesore and had to be demolished,” he said.

“One of its main uses was for showing cats at the Annual Temora Show and they have had to temporarily move to the town hall where they aren’t visible.

“The new building will mean the cat judging can be conducted at the showground again and it will also be available for community and private functions throughout the year.”

The funding will used to construct a 25 by 18 metre pavilion, including the laying of a concrete slab and installation of lighting and electrical work.