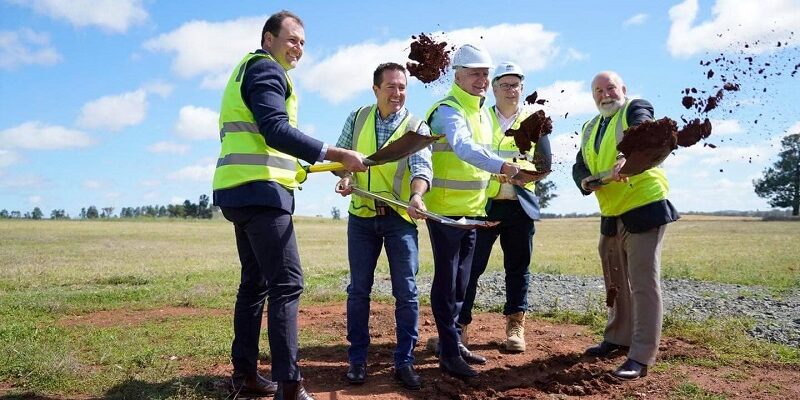 Major work is underway on the Parkes bypass.

It’s the town’s biggest ever infrastructure project – one that will transform journeys along the Newell Highway and create hundreds of local jobs.

Deputy Prime Minister and Minister for Infrastructure, Transport and Regional Development Barnaby Joyce said the $187.2 million project would deliver a game-changing upgrade to a 10.5-kilometre section of the highway to allow traffic and heavy vehicles to bypass Parkes.

“Bypassing the town of Parkes has been discussed for years but it’s the Australian and NSW Coalition Governments that are making this long-floated project a reality,” Mr Joyce said.

“In August, Georgiou Group was charged with managing the three-year construction of the bypass, and now we’re wasting no time assembling crews to start site establishment and vegetation clearing work.”

NSW Deputy Premier and Minister for Regional Transport and Roads Paul Toole said the bypass is the latest project rolling out along the Newell Highway as part of a record investment to deliver improved safety, boost freight productivity, and reduce travel times between the Victorian and Queensland borders.

“The Federal and NSW Governments are investing $1.455 billion to transform journeys along the freight backbone of NSW, and the Parkes bypass is the jewel in the crown of this investment,” Mr Toole said.

“We’ve just hit the halfway mark of our $228 million commitment to build 40 overtaking lanes along the Newell Highway and the Parkes bypass will further support the regional freight task in NSW, which is expected to increase by 12 per cent to 286 million tonnes moving across our road network by 2036.”

“There will be many benefits once the bypass is complete, including reduction in congestion, improvement in amenity in the central business district and removal of more than 1200 heavy vehicles and other traffic from the main town centre every day – all of which will improve safety for motorists and pedestrians in and around Parkes,” Mr McCormack said.

“We know how important this project is to the community – it will help people get to where they need to go sooner and safer when the project is due to be opened to traffic in 2024.”

Parliamentary Secretary to the Deputy Premier Sam Farraway said this work would also provide the town with a considerable economic benefit, with up to 350 jobs supported during the construction of the bypass.

“In addition to a 10.5 kilometre western bypass of Parkes, work will involve bridges over existing railway lines and connections to the Parkes Special Activation Precinct to leverage the Inland Rail project and the existing freight logistics hub,” Mr Farraway said.