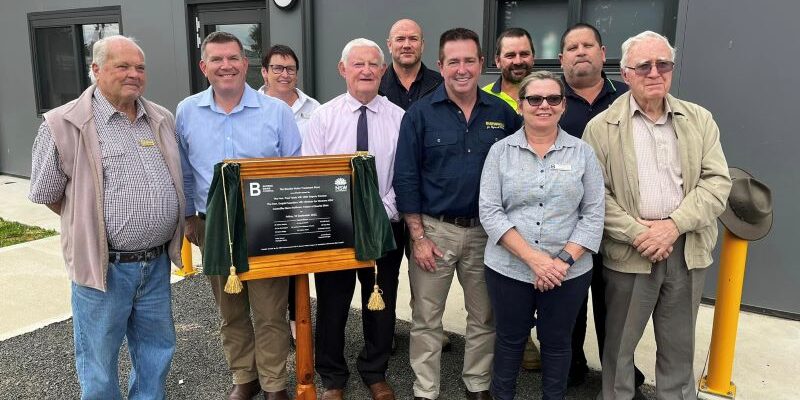 Bourke will be well prepared in the event of future droughts, with a $10 million state-of-the-art water treatment plant and a $5 million water security project which has delivered four new bores, two pipelines, and a pump station.

Deputy Premier and Minister for Regional NSW Paul Toole officially opened the plant and bores today and said the new infrastructure will put Bourke in a stronger position to manage the next dry spell.

“The NSW Government has delivered more than $21 million worth of water and sewerage upgrades in Bourke since 2017 to boost the town’s drought resilience and provide a safer and more secure water supply,” Mr Toole said.

“We have a proven track record when it comes to building world class water infrastructure that safeguards town water supply in remote areas like Bourke.”

Nationals Minister for Lands and Water Kevin Anderson said the new facility has given the people of Bourke access to the safe and reliable water they deserve.

“The new water treatment plant is a game changer, producing up to 3.3 megalitres of water a day, providing the town’s 2,000 residents with safer, cleaner drinking water that meets Australian standards – a huge improvement on the old plant that was built in 1964, which was prone to failure and could not treat water to an acceptable level,” Mr Anderson said.

“Bourke has another reason to celebrate with the completion of four bores that are 160 metres deep and are connected to the water treatment plant via 30 kilometres of new pipeline giving the town another water source to lean on during a drought.”

The bore will only be used as an emergency water supply. The final stage of the project, which involves connecting the new pumps to the power grid to eliminate the need for diesel generators, will be completed before the end of the year.

Bourke Mayor Barry Hollman said it marks a new era in water security for the region.

“This is a once-in-a-generation project for Bourke, and having infrastructure that is fit for the 21st century has been life changing for our community,” Mr Hollman said.

“You cannot underestimate the importance of having access to clean, top quality drinking water or being able to rely on an alternative water source when the Darling River levels are low.

“This is another example of Bourke Shire Council working hand-in-hand with the NSW Government to get the job done so we are able to manage a more variable climate and get the best water security outcomes for our community.”

The NSW Government worked with Council to deliver a new $5 million reverse osmosis plant to treat bore water during the drought in 2019 and is co-funding a new $2.1 million reservoir in Charles Street which will be finished at the beginning of December and will hold one megalitre of potable drinking water.

The projects are funded under the NSW Government’s successful $1.1 billion Safe and Secure Water Program which has delivered 27 completed projects with more than 200 others in various stages of delivery across regional NSW.