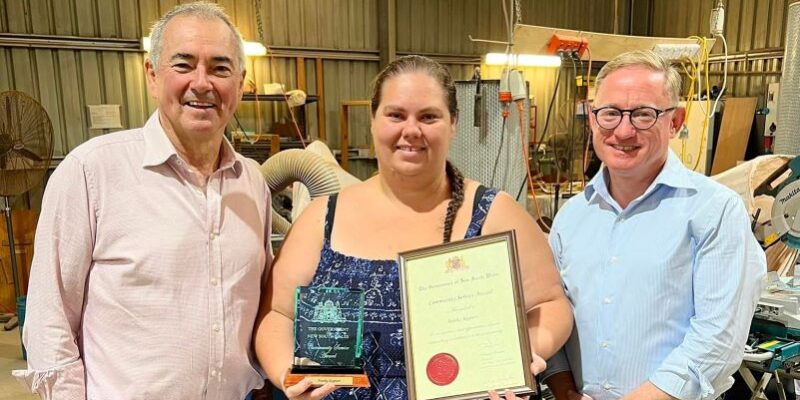 Leading Clarence Indigenous woman Aneika Kapeen has been honoured with a prestigious NSW Community Service Award, which has been presented by her local MP Chris Gulaptis and his Nationals colleague, Aboriginal Affairs Minister Ben Franklin.

“One thing led to another and at just 25 years old she became Chief Executive of the Nungera Cooperative Society, before two years later founding the Mudyala Aboriginal Corporation to support young people and their families and help them engage with education in a culturally appropriate way,” he said.

“Seeing that too few Indigenous students were making it to year 12, she implemented a terrific grassroots programs called ‘Education to Life Skills’ that targeted disengaged young men who were at high risk of leaving school and engaging in anti-social behaviour.

“The program is an intergenerational collaboration between Nungera and the Clarence River U3A Men’s Shed at Townsend and brings together young Indigenous men once week in safe place where they take part in handy work, cooking, culture and other life skills with to help build their sense of worth, purpose and knowledge.

“It has been a terrific success with positive feedback from both the participants and the Men’s Shed leaders who are very enthusiastic about the program continuing into the future.”

Ms Kapeen is an active member of the Yaegl Land Council, Youth Interagency and local Drug Action Team and has worked tirelessly to run events and activities such as NAIDOC, Close the Gap Day, Youth Week, school holiday activities and an Aboriginal Women’s Camp.

“Aneika is a real trailblazer. She goes about her work quietly but with such passion and determination and in a meaningful way to provide a brighter future for her people,” Mr Gulaptis said.

“She is a most worthy recipient of this prestigious award.”

Aboriginal Affairs Minister Ben Franklin MLC, who is based in the Northern Rivers, said Indigenous identity and leadership was surging in the region.
Earlier this month Mr Franklin opened the Giingana Freedom School in Coffs Harbour (Gumbaynggirr country) – the first bilingual Aboriginal school in NSW.