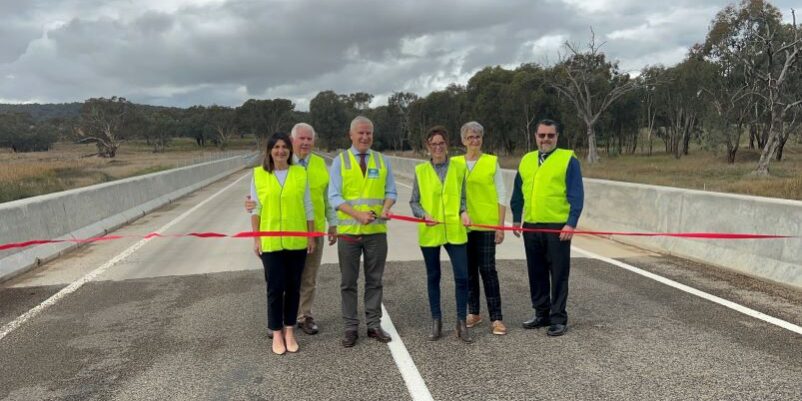 The new Wambanumba Creek Bridge will enhance road safety and productivity along the Murringo Road between Murringo and Young.

“This is a fantastic outcome for commuters who use the Murringo Road, particularly for those who use heavy vehicles, including local farmers and freight operators,” Mr McCormack said.

“This is exactly what the Bridges Renewal Program was established to do – improve safety for road users and unlock better heavy vehicle productivity – this bridge is a fine example of the Federal Government delivering for our regional roads by working in step with the State and Local Governments to achieve outcomes regional and rural communities expect and deserve.

“This builds on the delivery of Federal funding for projects in the region such as a decoupling bay on Milvale Road, the Bundarbo Bridge replacement near Jugiong and Burrangong Creek Bridge duplication on Bribbaree Road.”

“It is essential for improved connectivity and safety between two of our main towns of Young and Boorowa,” Councillor Roles said.

“It is also one of our main gateways from Hilltops to the Lachlan Valley Way and the Hume Highway.”

The old bridge was closed in October 2018 after structural damage was discovered. A detour was in place until the new bridge was constructed.

The Federal Government announced, in March this year, an additional $40 million over the next four years for the Bridges Renewal Program to provide further opportunity for more projects to be funded to improve the safety and efficiency of critical bridge infrastructure.

This brings the Nationals in Government commitment to this program up to nearly $900 million from 2015-16 and 2025-26, with an ongoing commitment of $85 million per year.

For more information on the Federal Government’s Bridges Renewal Program, go to: https://investment.infrastructure.gov.au/about/local-initiatives/bridges-renewal-program.aspx