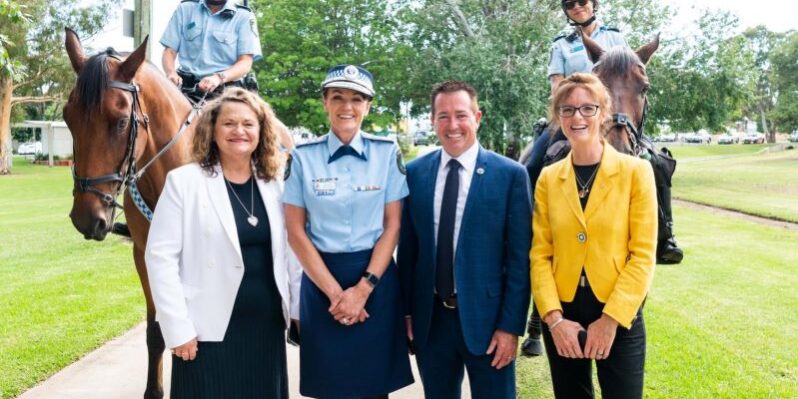 Commissioner Karen Webb APM has been formally appointed as the 23rd NSW Police Force Commissioner, during a ceremony and community event at Boorowa Central School.

The ceremony was conducted in the presence of Her Excellency the Honourable Margaret Beazley AC QC, Premier Dominic Perrottet, Deputy Premier and Minister for Police Paul Toole, as well as a number of other dignitaries and senior officers.

Commissioner Webb grew up in Boorowa and attended Boorowa Central School from her first day in kindergarten through to Year 12.

It is the first time a Police Commissioner has been sworn in to the role outside Sydney.

Deputy Premier and Minister for Police Paul Toole said the phenomenal trail Commissioner Webb had already blazed was testament to her country upbringing, proving hard work and persistence will get you everywhere.

“Commissioner Webb has not only made her hometown proud and inspired the next generation of children at Boorowa Central School, but she will be a formidable leader of the 22,000 men and women in the NSW Police Force who serve and protect our community every day,” Mr Toole said.

“Today officially marks the beginning of her journey as Commissioner – and I know she will be guided by the values she learnt right here in Boorowa and her belief in the importance of community and putting people first.”

Commissioner Webb said her upbringing had had a strong influence on her career so far and would continue to influence her priorities as Commissioner.

“My upbringing has led me to where I am today – the sense of community, sense of belonging, and those small-town values have helped shape me and my career within the NSW Police Force,” Commissioner Webb said.

“I feel incredibly privileged to have been formally appointed in front of so many friends and family in my hometown, and now look forward to the honour of serving as NSW Police Commissioner.

“My vision as Commissioner is for a better and more connected community and workforce. I believe the NSW Police Force is already a world class policing service, and my vision is to leave the organisation in a better place than when I started.”