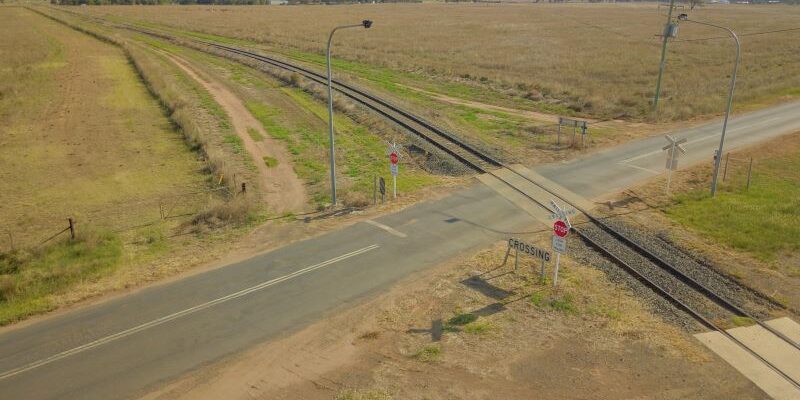 The NSW Nationals in the state government will trial new technology to reduce the risk of level crossing collisions between trains and vehicles in the bush.

The government will fund trials of innovative signs with LED flashing lights at level crossings in Narromine and Bribbaree, to improve awareness and safety.

Contracts have been signed with ARCS at Bribbaree and Sage Automation at Narromine to install new level crossing signs and the detailed design work is underway.

Nationals Minister for Regional Transport and Roads Sam Farraway said the government had listened to concerns raised through the community petition led by Maddie Bott, whose fiancée Ethan Hunter and work colleague Mark Fenton died in February last year when their B-Double truck collided with a freight train at Bribbaree, around 70 kilometres north-west of Young.

“68 per cent of public road crossings use only stop and give way signs to warn about the presence of a level crossing and the need to stop to look for trains,” Mr Farraway said.

“Transport for NSW has developed a new strategic direction to help fast track improvements at level crossings which will involve trialling the use of new technology.

“On top of this we have reduced speed limits to 80km per hour at more than 50 level crossings across regional NSW as part of the Level Crossing Speed Zone Reduction Program.

“We know a lot of crashes at level crossings occur where the road speed limit is 100km an hour or greater, so reducing the speed limit gives drivers more time to see the level crossing ahead and stop for oncoming trains.”

“NSW has thousands of level crossings and new technology will play an important part in improving safety,” Ms Neil said.

“This week is Rail Safety Week, and we remind travellers, pedestrians, commuters and rail workers that they can all play an active role in rail safety. And we urge the Australian community to Stay Rail Safe.”

ARCS Commercial Director Phil Lock said they are excited to be partnering with the NSW Government and delivering innovative technology to improve safety for regional communities.

“I’m looking forward to working with government to develop technology that could potentially save more lives in country communities,” Mr Lock said.

“SAGE is passionate about developing new systems to improve road safety in partnership with Transport for NSW and the NSW Government,” Mr Martin said.

The trial is funded through the Digital Restart Fund and will commence later this year. The data collected will be used to determine the effectiveness of the new technology.

For more information on safety at level crossings, visit: https://roadsafety.transport.nsw.gov.au/stayingsafe/level-crossings/index.html