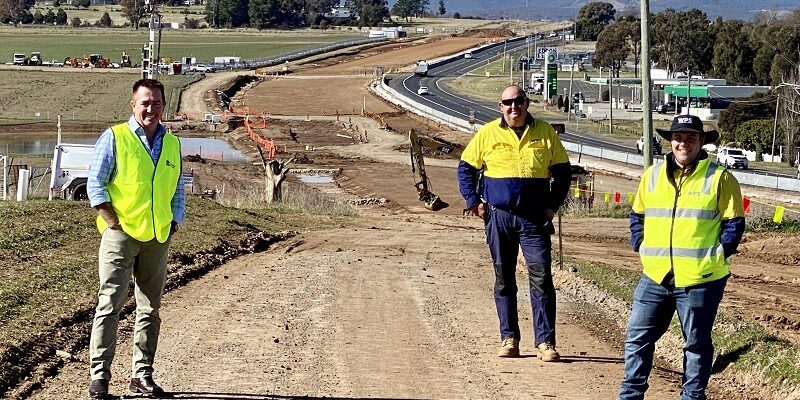 The landscape on the eastern entrance to Bathurst is starting to change, with work on the $45 million Great Western Highway upgrade from Kelso to Raglan now more than six months along.

NSW Nationals Member for Bathurst and Minister for Regional Transport and Roads Paul Toole said the site establishment and initial work has been completed and the project has moved into the general earthworks phase.

Earthworks and ground stabilisation in front of the Bathurst Regional Airport is now complete, telecommunications have been relocated through most of the project length, and earthwork has now commenced opposite the local BP Service Station.

Mr Toole said as well as the progress being made, another positive aspect of the project has been the high degree of local contractor engagement.

Local companies involved in the project have employed more than 25 people, on top of the 11 people employed directly by Transport for NSW.

This latest activity on the Kelso to Raglan upgrade follows work that started in March to remove the avenue of poplars from the northern side of the highway to make way for a widened road.

A new treescape will be planted in this area at the conclusion of the project in 2023.

The next phase of the project will involve stormwater, kerb and pavement works.

The NSW Nationals in the state government have committed $45 million to upgrade the Great Western Highway between Kelso and Raglan to improve safety and reduce travel time.