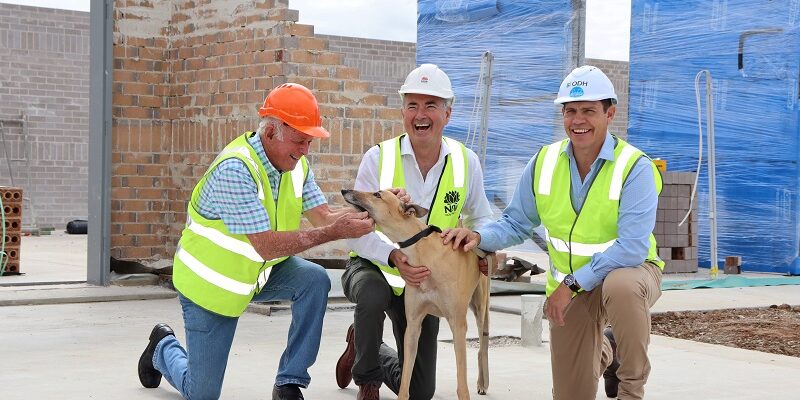 The Northern Rivers region may have experienced its wettest summer on record, but work on the new racing facility at Grafton remains on track thanks to the support of the NSW Nationals in the state government.

NSW Nationals Member for Clarence Chris Gulaptis and Greyhound Racing NSW (GRNSW) Chief Executive Officer Tony Mestrov inspected the site of the multi-million-dollar Grafton track rebuild on Thursday morning, with both delighted by the progress of the works.

Mr Gulaptis said he made a commitment to local greyhound racing participants some time ago to not only secure the sport’s future in the region, but also to ensure safer racing.

“This new facility will ensure that Grafton not only has one of the best greyhound racing tracks in NSW, but also one of the safest,” Mr Gulaptis said.

“This newly modernised facility will tick both boxes. For as long as I can remember greyhound racing has been synonymous with Grafton.

“The local track has always enjoyed strong patronage and this multi-million dollar investment will help greyhound racing thrive into the future.

“It is also a shot in the arm to the local economy with a number of local contractors working on the project.

“I’m really looking forward to seeing the finished product which I understand is on track to be completed by the end of April.”

Mr Mestrov said the new facility at Grafton will help greyhound racing to grow in the Northern Rivers, and importantly also ensures the welfare of greyhounds and the sustainability of the sport.

“Having spoken to the Grafton Greyhound Club president John Corrigan over recent months, I was a little concerned that the amount of wet weather the region has been inundated with might have had a negative impact on the proposed schedule of works,” Mr Mestrov said.

“But John, and my General Manager of Tracks and Infrastructure, David Aldred, both assured me everything was still moving along well, and it was great to be at Grafton to see that work on what is the biggest project ever undertaken by GRNSW is on track for completion by the end of April.

“Full credit to the club and all the contractors – many who are locally-based – for their persistence and hard work in surging ahead with the rebuild. It would also be remiss of me not to thank the committee of the Clarence River Jockey Club for their support in the realignment of the boundaries to allow for a track of the best standard to be built.”

Dawn of a new era

The Grafton track will be the first new greyhound track built in NSW in many decades, at a cost of $4.6 million, which is being funded as part of the NSW Government’s $30 million, five-year Greyhound Racing Capital Grants Program to improve safety and boost animal welfare standards at racetracks across the state. It replaces the original circuit which was built in the 1940s.

The new track will be built to the latest Design and Construction Minimum Standards with a wider turn radius, improved track cambers and transitions, and strategically placed starting positions to provide a safer transit for greyhounds.

Some of the features of the new facility are the latest technology in starting box design, lure and lure rail design, and track lighting design with full LED lighting of the oval track.

All safety aids are being installed in accordance with the Track Safety Standards, including safety rails and protective fence and catching pen safety padding.

The kennel design will also be state of the art to rival the best greyhound on-track facilities in the country and will be built to the new Minimum Standards for Facilities and Amenities.

Mr Mestrov also confirmed that the facility will have the IsoLynx timing system installed, a system with real-time tracking of dogs, providing instant data which can then be displayed on racing vision.

Grafton Greyhound Club president John Corrigan was excited with the progress of the works and counting the days until his club can be racing again, on a state of the art facility.

“It has been an exciting time for all participants and the club ever since work started back in October,” Mr Corrigan said.

“Despite some unseasonal weather over summer – and we have had an incredible amount of rain – it’s been fantastic to see the progress continue and I have been pleased to hear that we remain on schedule for completion of works at the end of April, in plenty of time for our huge Winter Carnival.”